The Showbread Institute was established in 2018 by Eliezer Meir Saidel, a master baker by profession, after many years of research into the Meal Offerings of the Temple and particularly the Showbread. When he began to teach others about the Showbread via lectures and workshops, he decided to open an official institute to serve as an umbrella organization for the research, publication and educational activites, in Karnei Shomron, Israel. The Showbread Institute fosters peace and tolerance through our charity work, engages in outreach by circulating between communites, educational institutions, schools, yeshivas, ulpanas etc. in Israel and abroad, lecturing, teaching and reacquainting the People of Israel with the Temple Service in preparation for the rebuilding of the 3rd Temple, speedily in our days. The hands-on workshop includes actual baking of the Showbread using authentic ingredients, methods and utensils, with a thorough explanation of the symbolism and the miracles associated with the Showbread. A rare peek into actual ancient Temple Service - preparing the special flour, kneading the dou ... Everyone knows that there is a link between the Showbread and wealth/livelihood. How exactly they are connected, not everyone knows. As a result of our research in the Showbread Institute and recent archeological discoveries, we have unmasked this umbilical connection. A fascinating lecture linking ... It is written "And they shall build me a Temple and I will dwell within them" (Exodus, 25:8). The Divine commandment to build a Temple applies first and foremost to the Temple within each and every one of us. That being the case, what is the common thread between the physical structures of the Templ ... Unique Beit Hamikdash Shiur Series for the Three Weeks Join us for a special series of shiurim that bring the Beit Hamikdash and the Avoda to life and punctuate how lacking our lives are without them. Includes groundbreaking new findings that are being publicized for the first time by Eliezer Meir Saidel, Director of Machon Lechem Hapanim, Israel. Lechem Hapanim and the Power of a Smile , Sunday 20 Tammuz (12 July), 11am - 12:15pm EDT ...
To article

Rabbi Yosef Ben Porat (Shlita), head of Yeshiva “Ashrei Ha’Ish”, in his shiur (lecture) “Why do we not eat chametz (leaven) on Passover?” (2019) explains that matzo symbolizes truth while chametz (leaven) symbolizes falsehood. Matzo bread includes elements that are totally visible to the naked eye. There is nothing hidden in matzo – it is a compound made from flour and water only, baked immediately after bei ...
To article

The Mystery of the Garmu Family The story of the Garmu family, who were in charge of preparing the Showbread during the period of the 2nd Temple is known to all. But who were the Garmu family really? And what is their true story? Source of the name Garmu The first time the Garmu’s are mentioned is in the Talmud, Tractate Yoma (38a) where their name appears as follows – גרמו. There is uncertainty exactly how the word גרמו is pronounced. Unlike the family who pr ...
To article

Regarding the debate between Rebi Hanina and Rebi Yohanan (Talmud, Tractate Menahot 94b) as to what the shape of the Showbread looked like (a rectangular folded shape – Teiva Perutza/Open-box, or a rounded folded shape – Sfina Rokedet/Dancing-ship), the commentator Chazon Ish (Menahot 42, pg. 80) writes “And it appears that according to the letter of the law of the Showbread, it is possible to make it in any shape that you like ...
To article The commentator Rashi on the verse detailing the components of the Showbread Table “And you shall make its pans, bowls, “kesot” and “menakiyot” …….. ועשית קערותיו וכפותיו וקשותיו ומנקיותיו” (Exodus 25:29) says – “Its ‘kesot’ – these are a kind of half hollow pipes split along their length, made of gold and were arranged that 3 would sit on the top of each loaf, so tha ...
To article In a previous article “Dancing Ship V or U?”we spoke about the shape of the Showbread according to the opinion of Rebi Yohanan and Rashi’s interpretation of how that looked, how it should more resemble a U shape than the V shape depicted in the Vilna Shas edition of the Talmud. However, even Rashi’s drawing in the shape of a U is not sufficient to precisely define how the Sfina Rokedet (dancing-ship) shape looked. To ...
To article

In a Mishna (Menahot 96a) it states – “The Showbread is ten [tefachim/handbreadths] long and 5 [tefachim/handbreadths] wide and its “kranot” are 7 eztbaot (finger widths)”. Rashi (ibid.) in reference to the Two Loaves offering says – “Its ‘kranot’: that he would stick dough on each corner זוית of the bread, like horns קרניים and the length of each horn קרן is 4 finger widths”. ...
To article In the Talmud (Tractate Menahot 94b) there is a famous debate between Rebi Hanina and Rebi Yohanan about the shape of the Showbread – “R. Hanina says like a ‘Teiva Perutza’ (open box) R. Yohanan says like a ‘Sfina Rokedet (dancing ship)”. The commentator Rashi (ibid.) interprets the Sfina Rokedet (dancing ship) shape as follows – “קווי"ש (an abbreviation of a word in ancient French) ..and i ...
To article The Mystery of the Garmu Famil ...

The real story of the Garmu Family, the family in charge of baking the Showbread during the 2nd Temple period. What lies at the heart of the debate between Rebi Hanina and Rebi Yohanan regarding the shape of the Showbread? The structure of the kanim (pipes) and snipim (uprights) as related to the different opinons of the shape of the Showbread. The precise form of the Sfina ...

What did the shape of the Showbread according to R. Yohanan, the Sfina Rokedet (dancing-ship) shape look like?

Kranot (corners) of the Showbr ... The shape of the Dancing Ship opinion in the Talmud is depicted in the Vilna Shas edition as a V shape. Is this correct? From first glance it appears that Maimonides rules that the halacha is according to Rebi Hanina in regards to the shape of the Showbread, but this is not so.
סרטונים 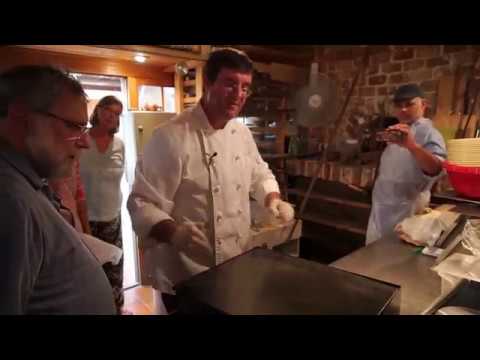